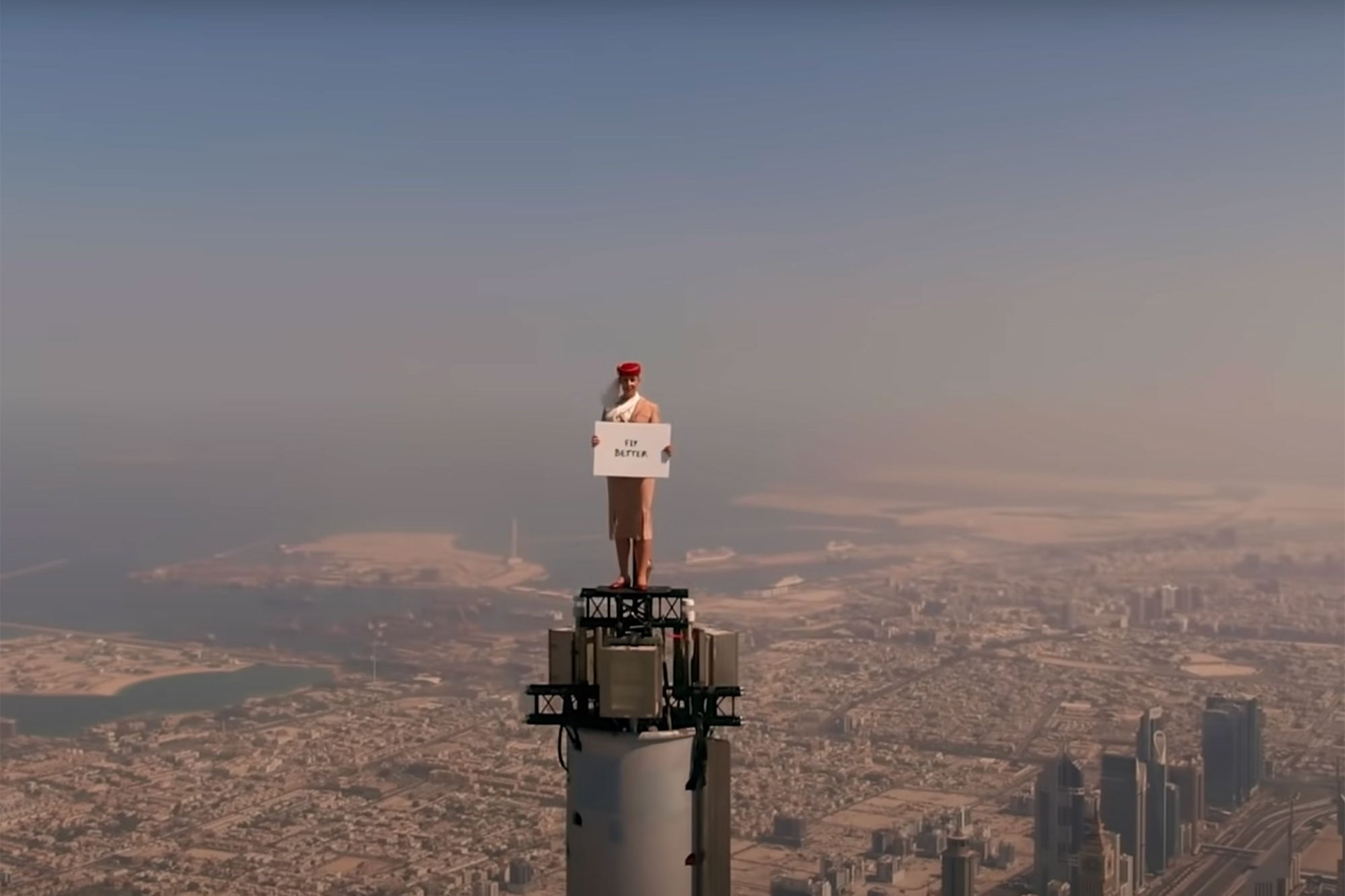 Many netizens wondered if it was real or was it a montage, that’s how the company responded.

At the top of the largest building in the world, the Burj Khalifa , the impressive Emirates Airlines commercial was filmed, casting doubt on the veracity of its content.

At 828 meters , the luxury airline filmed a commercial conceptualized and directed by the company, with the help of Prime Productions AMG, based in Dubai.

The 30-second video was produced after the UAE was removed from the red list and moved to the amber list in the UK, Daily Pakistan reports, while it went viral.

At the beginning of the clip, a woman is seen wearing the Emirates uniform holding several signs that she passes little by little to finish giving a message: “Moving the United Arab Emirates to the Amber list of the United Kingdom has made us feel at the top of the world. Fly Emirates. Fly better ” . At the end, the camera zooms out and takes a shot of the spectacular view of Dubai.

And despite what many may think, this one did not use any kind of green screen or special effects, but was the result of rigorous planning, training, testing and safety protocols. As the same company showed with another video about the process to achieve such a feat.

How was the Emirates Airlines commercial made?

One of the most recurring doubts is whether the woman in the frame was a real member of the Emirates crew. The company explained that it did cast the employees and although there were some willing and capable candidates, it ended up hiring a professional skydiving structure, Nicole Smith-Ludvik, just to ensure safety. According to Sam Chui , the area where the protagonist stood had a circumference of 1.2 meters.

The same medium explains that the filming began at dawn to capture the light of the golden hour. As for the team, which included the main star, it began its ascent before dawn. It took them an hour and 15 minutes to climb from the 160th floor of the Burj Khalifa . It was easy? For nothing, the whole team had to climb several levels and climb stairs inside a tube to reach the top. The filming lasted approximately 5 hours.

Nicole wore a safety harness under her Emirates uniform, which was attached to a custom platform and was attached directly to the pinnacle. For the shots, a single drone was used to film the entire sequence.

“We are always looking to defy the norm and push the limits at Emirates. We do it every day through our innovative services, our best product and of course, through our advertising. The calm and confident cabin crew seen in the advertisement is an embodiment of our front-line team, serving travelers and ensuring their safety. We are proud to be among the privileged few who have been allowed to film atop the Burj Khalifa and even more proud to be able to showcase our beautiful city, Dubai, ”said Sir Tim Clark , President of Emirates Airline.

In truth, there have been few who have stepped to the top, on the short list are Tom Cruise and the crown prince of Dubai, Sheikh Hamdan bin Mohammed bin Rashid Al Maktoum.

Nicole Smith-Ludvik, is an adventurous woman, parachutist, traveler, hiker and yoga instructor. She shared the clip on Instagram and said. “This is, without a doubt, one of the most amazing and exciting stunts I have ever done. A big thank you to Emirates Airlines for their creative marketing idea! It was a pleasure to be part of the team ”.

This day in search marketing history: February 4
6 Ways to Wring All the Value from Your Earned Media Coverage
If You’re Not Using This Type of Content in Your Marketing, You’re Missing Out
Want to Make More Money? 10 Experts Share 10 Tips to Grow Your Business
Why SEO should be a product