On June 2nd, Google began rolling out the June 2021 core update. Early data seems to show the rollout was mostly felt a few days after it began rolling out, but as Google has said, it can take up to two weeks to fully roll out. Based on everything we have seen so far this update took longer to roll out that prior updates, more spread out when compared to the December 2020 core update – which was a big one. To be clear, if your site was impacted by this June 2021 core update, then for you, the update was likely a big one.

We asked several data companies that track Google’s search results to send us impressions of this update. The results were a bit of a mixed bag; in terms of when the update hit the hardest, who it hit the most and how big of an impact it was.

The facts. What we know from Google, as we previously reported, is that the June 2021 core update started to roll out around 6:30pm ET on Wednesday, June 2nd. Like all core updates, this was a global update and was not specific to any region, language or category of web sites. It is a classic “broad core update” that Google releases every several months or so. The previous core update was just shy of a six-month wait period, where the December 2020 core update took place on Dec. 3rd.

As a reminder, this update is just about a week in and it is possible that we will continue to see ranking fluctuations from this update. But we didn’t really see significant signs of this update until this past Saturday and Sunday, June 5th and June 6th.

Reverses may occur. Since another core update is rolling out a month later, whatever gains or losses you saw from this June 2021 core update may reverse itself next month. “Of course, any core update can produce drops or gains for some content. Because of the two-part nature of this release, it’s possible a very small slice of content might see changes in June that reverse in July,” Google said. So maybe do not celebrate yet, more is to come.

SEMRush. Yulia Ibragimova, Olga Andrienko and the Semrush team prepared a lot of data for us on this update. Semrush said that this update was mostly felt on Friday, June 4th and Saturday June 5th. Both desktop and search results saw changes similar to each other, in terms of volatility. The top five categories that felt the most change were health, autos, pets and animals, science, and travel. The Semrush sensor tracking tool is showing a score of 9.3 on Friday June 4th and 9.1 on Saturday June 5th, when you look at the date range from June 4th through June 6th, the score would be around 8.4. Compare that to the December 2020 core update that showed almost all of its volatility on one day, December 4th at a 9.4 level. Keep in mind, Semrush was one of the first tools to pick up on these changes, when most were not noticing yet – I suspect a data center population situation.

Here is the SEMRush volatility by category:

Here is a chart showing how much more significant this update was from RankRanger’s data: 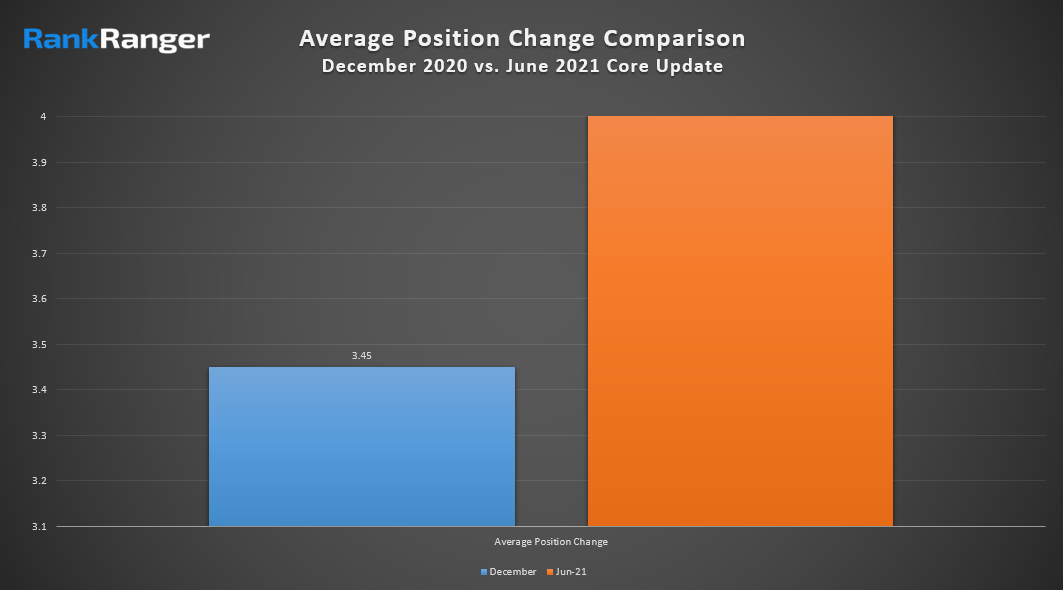 The reason that RankRanger saw this update as being more substantial than the December 2020 update was because of an increase in fluctuations in the top five results.  Check out this chart that shows the top five results having a much stronger shift than others: 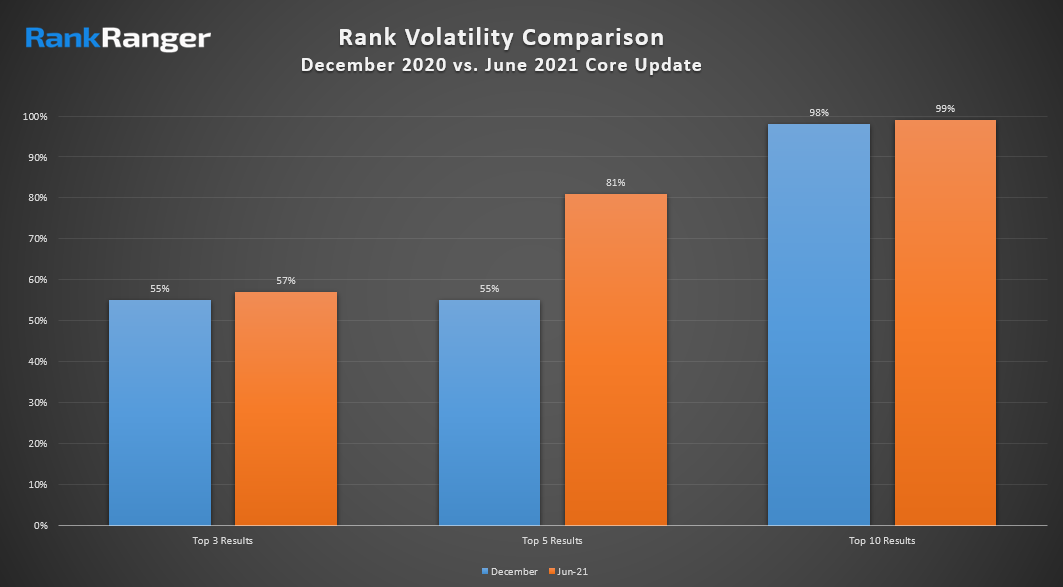 Also, RankRanger told us that the niches or categories of sites they track, that within the top three and five results, retail and travel were hit harder while the health niche generally showed less volatility.

Here is the RankRanger index tracker chart showing how this update was spread over a three-day period:

Searchmetrics. Marcus Tober from Searchmetrics told us this update “seemingly had its peak on Sunday.” Based on his very early analysis he said the “pattern it seems many directory pages lost, also some more know ones like zoominfo.com.” He also noticed an “interesting pattern where fake airport pages were created” that seemed to get hit by this update.

Sistrix. Sistrix also published some data on this update where Johannes Beus, the CEO of Sistrix, “Even before this Core Update, there was quite a lot of movement in the Google search results over the last few weeks.” Steve Paine from Sistrix told us “the gains or losses with this Core Update are somewhat lower, so far, than with other updates in the past. There can be two reasons for this: on the one hand, Google has already announced that only some of the changes will be rolled out in June and the rest will follow in July. On the other hand, there are indications that Google is using new metrics / algorithms and is therefore proceeding cautiously with the first rollout.”

Also Sistrix noticed that fewer domains that previously reacted to Core Updates were impacted by this one. Steve Paine added that this may “suggest that Google is (at least partially) using fundamentally different or new methodologies.”

Here is a chart showing some of these domains and how they dropped in visibility within Google Search:

Some of the winners according to Sistrix include imdb.com, cambridge.org, amazon.com, wikipedia.org, collinsdictionary.com, amazon.co.uk, dictionary.com, merriam-webster.com, spotify.com and twitter.com.

The SEO community. This core update was different from most others in that the SEO industry was not really buzzing about this update within 24-hours of the announcement. Very few actually noticed ranking changes on the sites they manage until three or more days after it was announced. It is not clear why the rollout took so long to be noticed but as of Monday the SEO community started to notice changes. Some sites saw huge drops or gains but others saw not as much. It seems like this core update, at least part one of it, was weaker than some past core updates according to some data providers, but others saw this to be a stronger update. I shared a bunch of that chatter and graphs of what SEOs noticed on my personal blog. You can read some of the community chatter on the Search Engine Roundtable.

What to do if you are hit. Google has given advice on what to consider if you are negatively impacted by a core update in the past. There aren’t specific actions to take to recover, and in fact, a negative rankings impact may not signal anything is wrong with your pages. However, Google has offered a list of questions to consider if your site is hit by a core update. Google did say you can see a bit of a recovery between core updates but the biggest change you would see would be after another core update.

Why we care. It is often hard to isolate what you need to do to reverse any algorithmic hit your site may have seen. When it comes to Google core updates, it is even harder to do so. We are expecting a new core update next month and it is possible that the ranking changes you saw this month can be reversed next month. If this data and previous experience and advice has shown us is that these core updates are broad, wide and cover a lot of overall quality issues. The data above has reinforced this to be true. So if your site was hit by a core update, it is often recommended to step back from it all, take a wider view of your overall web site and see what you can do to improve the site overall.

3 Myths About PR That Are Hurting Your Brand’s Success
3 mitos sobre las relaciones públicas que dañan el éxito de tu marca
Why a Proper Digital Marketing Strategy Is a Financial Advisor’s Secret Weapon
Conversational AI Is a Revolution That’s Just Getting Started. Here’s How It Can Boost Your Business.
5 Sales and Marketing Trends for 2023 You Must Know